Welcome to the official website for author Tj Turner.

I have an incurable fascination with tipping points, especially those of the historical variety. There's something alluring about a person or group who arrives at just the right moment in time, at exactly the right place, and manages to change the world we all know. Do we make our own fate, or is it laid out in front of us simply to follow? 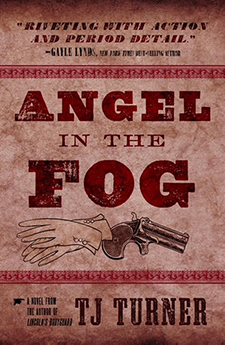 Angel in the Fog


"Suspenseful and rich with historical detail…. This is a grand yarn that will rivet you to your reading chair.""
—Gayle Lynds, New York Times best-selling author of The Assassins

Plucked from a personal, Molly Ferguson—now a Pinkerton agent—ventures far behind enemy lines in the Deep South to spy for the Union...

Molly Ferguson's comfortable life unravels when her Louisiana home is burned to the ground, her family murdered, and she is enslaved in a Baltimore brothel. Amidst the threat of the Civil War, Molly learns of secessionist plans to assassinate President-elect Abraham Lincoln as he makes his way to Washington for his inauguration. She's manages to pass this information to a Pinkerton agent posing as a client. Impressed with her fortitude and intelligence, the Pinkerton Agency arranges for Molly's freedom and brings her under the tutelage of Mrs. Kate Warne, America's first female detective. After they save Mr. Lincoln in Baltimore, Molly is sent by the Pinkerton Agency into the Deep South—where the Civil War now rages—a spy behind enemy lines.

Read about the other books in the series