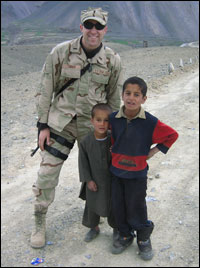 An essay I wrote about my wartime experience—The Power of Teddy Bears—was accepted and read on NPR's This I Believe national essay series.

I even finished a second novel set in Afghanistan, that according to my mother isn't half-bad. I was revising that manuscript when a different story became lodged in my head—Lincoln's Bodyguard.

Sometimes an idea, or even a character, just seems to take hold and demands to be heard. That's exactly what happened. I had heard other authors describe that kind experience, and I was becoming afraid it might never happen for me—like getting a date for the prom.

But the story of Joseph Foster poured out. He wanted his story told. The setting is a revisionist twist to the end of the Civil War, a dystopian historical, with Joseph at the center of a growing storm that sees his past and future collapse together to plot the fate of our nation.